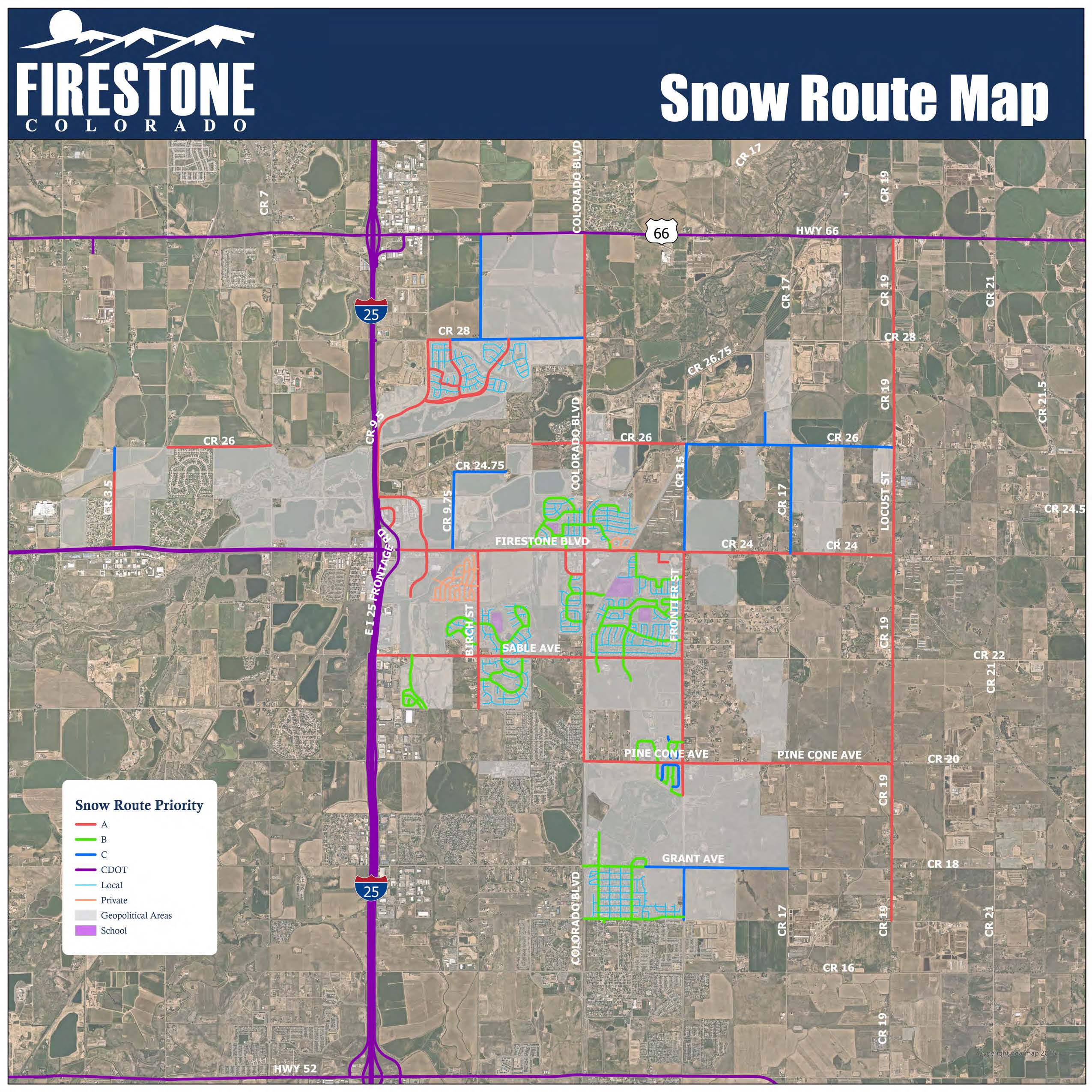 Living in Colorado means snow, ice and freezing temperatures. The Town of Firestone recognizes the importance of snow removal for safe passage of emergency vehicles and to facilitate safe traffic flow for motorists in the community.

The Town’s snow removal plan outlines the procedures used for snow removal operations. Streets are plowed according to this plan to ensure the best time management, resources, equipment and manpower are utilized during a storm.

Snow and Ice Accumulation in Gutters

The Town often receives phone calls in regards to snow and ice accumulation in the gutters along the streets. The Public Works team will work to alleviate concerns and potential problems. To help the flow of melting snow and ice, park slightly away from curbs and avoid covering storm drainage inlets.

When the forecast calls for 50 percent or greater for snowfall, the Town will apply magnesium chloride, which is a liquid de-icer applied to streets when conditions permit to prevent snow from bonding to the pavement and forming ice. The de-icer may be applied during or after a storm on snow packed roads to break the bond on the road surface to allow for easier plowing.

Once snow has accumulated to 2 inches or more on streets, plow trucks will plow snow and lay down a granule de-icer to continue efforts of melting snow and ice. Amount and rate of product distributed is in accordance with manufacturers specifications and is controlled by a programmed on-board computer. The specifications are effective yet environmentally friendly.

Residential streets are plowed down the middle to create a passable lane. Public Works makes every effort to plow snow in a manner that does not block driveways, sidewalks or parked vehicles. However, with heavier snowfall plows may leave a mound or windrow of snow along the streets edge.

Give Our Snow Plows Plenty of Room to Work

The Firestone Public Works snow plow team will work efficiently to clear roadways of snow for safe passage. If you meet a snow plow on the roads, please use caution and follow these simple tips.

Once the snow storm has ended, residents have 24 hours to clear their sidewalks to ensure safe, clear passage according to the Firestone Municipal Code. The Town makes every effort to keep snow in the right of way to avoid additional snow to adjacent sidewalks. Residents can also help the Town with its snow removal operations by shoveling snow from walks and drives onto their property, instead of into the street. This will create a cooperative partnership between the Town and its residents to keep roadways and sidewalks safe.

Are You Prepared for the Cold?

Living in Colorado means you must be prepared for cold weather when it hits. Read more about cold weather tips.